Slavyanka is an a cappella choir based in San Francisco, CA. It consists of a men's choir, a women's choir and a mixed choir. Its vision is to sustain Slavyanka as an enduring musical enterprise excelling in the highest standards of choral singing.

• Perform music from the varied choral traditions of Russia and Eastern Europe and America.

• Understand and share the cultural history behind these traditions,  and

• Contribute to international and intercultural understanding between East and West through the special language of a cappella choral music. 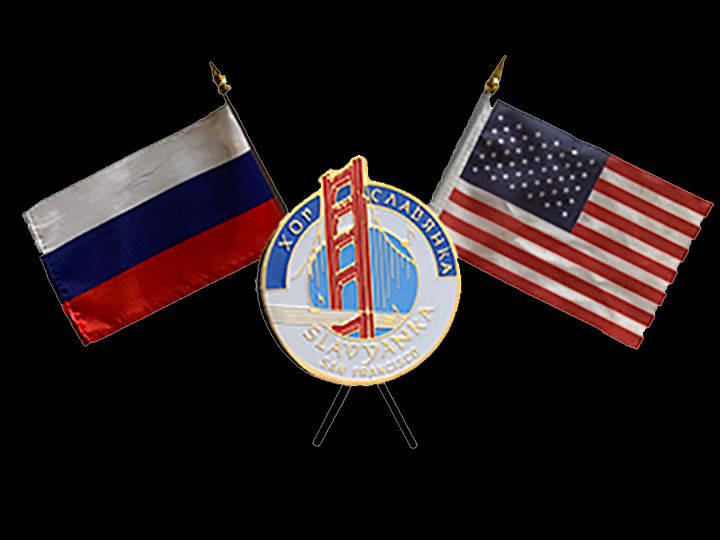 Efforts for Cross-Cultural Understanding
The Slavyanka Russian Chorus has been active in local cross-cultural efforts since its founding. For many years, the Chorus has donated performances and participated in annual Living History events at Fort Ross. We were very active in efforts to create a Sister City relationship between San Francisco and St. Petersburg, and were invited by the Mayor’s Office to sing for Russian President Mikhail Gorbachev during his visit here in 1990. We also have worked collaboratively with other musicians in the Bay Area to increase awareness and knowledge about Russian music. Over the years, the Chorus has also built up an extensive digital library of choral music scores, recordings, and related materials from Russia and Eastern Europe that have been valuable resources that we share with others in the local choral community. Artistic Director Irina Shachneva has been a consultant on Russian folk and choral music to other local groups singing Slavic and Eastern European repertoire, including Oakland-based Kitka and San Jose-based Kostroma. The Slavyanka Russian Chorus was founded by non-Russian Americans who simply shared a love of Russian music. As a musical family that has grown to include both Russian Americans and non-Russian Americans, the Chorus has helped American singers and audiences connect and engage with the many Russian and Eastern European communities in the Bay Area – from people who emigrated early in the twentieth century to more recent immigrants and members of subsequent generations who maintain a strong connection to their heritage. Over the years, the Chorus has sponsored a number of special charitable concerts here in San Francisco and overseas. In 1986, we participated in a special performance to help Armenian earthquake victims, and in 1989 participated in a Soviet benefit to help San Francisco earthquake victims (put on in Moscow while on tour). To honor the memory of the 64 members of the famed Alexandrov Ensemble who died in a tragic plane crash while en route to a performance, Slavyanka sponsored a special memorial concert in San Francisco in February 2017, with four local choirs performing. This free, very moving concert was attended by some 700 people (including the Russian Consul General) and was featured on Russian television. Internationally, Slavyanka has also been an important cultural ambassador to the people of Russia through its tours and recordings, as well as a key resource for bringing choral artists from Russia to the Bay Area. The Chorus has toured six times to Russia and Eastern Europe, where we were received by enthusiastic audiences in Russia’s best concert halls. Our latest tour was in October 2016; we were the only American chorus invited to perform in the 150th anniversary celebration of Moscow’s historic Tchaikovsky Conservatory. During that tour we also rehearsed and performed with several top Russian choirs, and received a warm welcome on Russia’s main national morning television program, Dobroe Utro. What runs through all these many activities over 38 years is the conviction that regardless of the state of political relations between our governments (and especially when governmental relations are problematic), this kind of genuine, people-to-people connection through music creates and sustains a vital fabric of relationship and understanding between the peoples of our two countries -- and directly contributes to a more peaceful world.
Home
Donations
Members, Alumni and Guest Singers
About Us
Our Beginning 1979 - 1993
Slavyanka 40 Year Legacy
Slavyanka 40 Years of Glorious Concerts
Slavyanka Captured Memories
Our Music
Chorus Repertoire
Recordings
What We Do
Our Vision & Mission
Leadership
Contact Us
Slavyanka Chorus Member Portal